This work is licensed under a Creative Commons Attribution 4.0 International License.

Nearly nine months ago on January 13, I brought my first car. A second-hand one. The compact silver sedan managed to win my attention on the very word go. Now, I was told a thing or two about second-hand cars, and how a new driver on Oman’s roads should always be wary of buying one, but I honestly, was very confident about hitting it off with Jake. Oh, I forgot to mention, that’s what I christened my car.
Jake sounded very much like me.
Now what I didn’t realise is that Jake was not going to be as uncomplicated (as me) or like his name suggested. On the technical front, he came with a lot of glitches. Humanising this little silver thing, however, seemed to help the “mechanically-unsound-me” come to terms with his problems. I now began associating Jake with the failings of our kind. And trust me, I found him leave behind too many clues. Jake’s tantrums are not unfounded; the machine is as much a man, as I am a woman.
Here’s why: 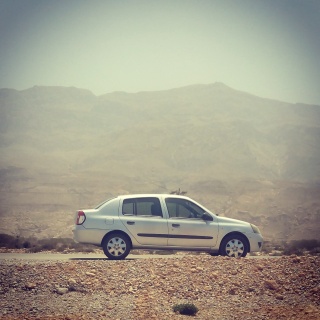 Jake PMS’
Okay. He’s a man. So what? In the beginning, I wondered if I should have named Jake, Jacky. It would have justified the monthly roll. But wait, I know men cannot be absolved of strange behaviour, and worse, they don’t need a week of the month to spell out what it means to be irrational or illogical.
But am not lying. Every damn month, strategically somewhere in the first or last week, Jake suddenly turns grumpy, moody and goes all out of balance. Sometimes, he overheats, on other days, his battery runs out. Often, out of the blue, his gear gets so stubborn, it just won’t budge. Also more than often, his coolant takes a leak. Now, all these events were carefully timed over the last nine months, enough to send me into a tizzy. I fixed him each time, hoping he’d come out all renewed and rejuvenated, and as good as brand new. But no, if his parts won’t give in, he attracts opposite cars to pick up a fight with him. Once, an SUV caught him off-guard, hitting him from the rear. I could hear Jake silently say, “Thank you very much Mr SUV. Just when I was wondering, what more I had to offer to Jane, you came riding along from behind. And woah, you did a great job at breaking that headlight of mine. It was anyway too flashy for my exterior.”
Jake is possessive
Ah! Just like I would want my man to be. However, there’s just one small issue here. When Jake becomes possessive, he simply stops working. Initially, I thought I was imagining all of this. Then the repeated cycle, helped me put two and two together. What I learnt is that each time he sees me with red lipstick on, and my hair left all loose, all his mechanical functions take a beating. It’s like he’s telling me, “If you get out into the world like this, I just won’t let you go. You will stay right here with me and I don’t care whose loss it is.”
Meanwhile, I fiddle with my car keys, rev up my engine, then turn it off and repeat the process again and again, – all in the crazy sultanate heat. That’s when I start sweating profusely. My lipstick melts, my sunscreen spreads out, my eye-liner smudges, my hair gets all damp. I tie my hair in a hurried bun and wipe out all that melting make-up with a tissue, and say a small prayer, before I try to turn on the engine one last time. And what do you expect: Jake suddenly works like a dream. “Yay!” I tell myself. “Sexy, only for me,” Jake mutters.
Jake is principled
I need to give Jake some credit here. Despite all his heroics and tantrums, he still never gives up on me. The two times he developed serious issues, for whatever reasons – PMS or unwarranted possessiveness, I forewarned him that he could just not give away on the 15km-long journey to work. And he surprisingly, didn’t. Despite my mechanics confessing that he would not outlive his prime, he stayed steadfast and dropped me safely to my place of commute. My legs shook nervously through it all, but when I made it in one piece, I had to give this man a pat on his shoulder and a peck on his cheek. That’s a nice quality to have. At least when you consider him yours.
Having said that, I doubt we will be together too long. But his relentless histrionics added the much-needed drama in my life. He keeps me on my toes, but always has his eyes on the road. And then, he loves to push me to the hilt, making me tougher and bolder albeit without make-up. He has also taught me a thing or two about life, and how just having a man to yourself, is not the end of the road. It’s a long journey out there! Jake and Jane have seen it all.

This work is licensed under a Creative Commons Attribution-NonCommercial-NoDerivs 3.0 Unported License.